Can it be that not much happened in the world of music today?  I’ll be editing this post as I find items!

In the meantime, please enjoy this video:

.1931 ~ The “Star Spangled Banner” was adopted as the American national anthem. The song was originally known as “Defense of Fort McHenry.”

.1931 ~ The first jazz album to sell a million copies was recorded. It was “Minnie The Moocher” by Cab Calloway.

.1945 ~ Bing Crosby recorded “Temptation” with John Scott Trotter’s Orchestra. He had recorded it before on October 22, 1933, with Lennie Hayton’s orchestra.

. 1889 ~ John Mills, Guitarist, singer, bass with The Mills Brothers. He was father of the four Mills brothers and took youngest son John, Jr.’s place after his death in 1935

. 1916 ~ The Baltimore Symphony Orchestra presented its first concert. The symphony was the first by a municipal orchestra to be supported by taxes.

. 1938 ~ Larry Clinton and his orchestra recorded Martha on Victor Records. Bea Wain was heard warbling the vocals on the tune.

. 1939 ~ Gerry Goffin, Lyricist with Carole King and with Michael Masser

. 1940 ~ NBC radio presented “The Chamber Music Society of Lower Basin Street” for the first time. The famous Blue network series included several distinguished alumni — among them, Dinah Shore and Zero Mostel. The chairman, or host, of “The Chamber Music Society of Lower Basin Street” was Milton Cross. He would say things like, “A Bostonian looks like he’s smelling something. A New Yorker looks like he’s found it.” The show combined satire, blues and jazz and was built around what were called the three Bs of music: Barrelhouse, Boogie Woogie and Blues.

. 2001 ~ Dame Sonia Arova, a Bulgarian-born ballerina who danced with Rudolf Nureyev, at his request, in his American debut, died of pancreatic cancer at the age of 74. Arova was knighted by King Olaf V of Norway, only the second woman to receive that distinction. During her years as founding artistic director of the State of Alabama Ballet, Dame Sonia Arova changed the face of dance in Birmingham. Through a stage career that lasted three decades and a teaching career that occupied three more, she lived and breathed ballet. Born in Sofia, Bulgaria, Arova began dancing at age 6. By 8, she was studying ballet intensively in Paris. When war broke out in 1940, she escaped the Nazis’ advance with her English piano teacher in a harrowing flight during which their train was machine-gunned by German troops. Arriving in England, Arova was enrolled in an arts school and later joined the International Ballet. In 1965, Arova became artistic director of the Norwegian National Ballet, moved to California in 1971 to co-direct the San Diego Ballet and in 1975 accepted a teaching position at the Alabama School of Fine Arts. Maintaining her position at ASFA, she took over the newly formed State of Alabama Ballet in 1981 as artistic director, with her husband, Thor Sutowski, as artistic associate and choreographer. In 1996, the couple returned to San Diego, and she spent her last years with the San Diego Ballet.

. 2003 ~ Moses G. Hogan, 45, a pianist and choral conductor known for his contemporary arrangements of spirituals, died of a brain tumor in New Orleans. He was editor of the Oxford Book of Spirituals, published in 2001 by Oxford University Press. The book has become the U.S. music division’s top seller. Mr. Hogan also toured with his own singing groups, the Moses Hogan Chorale and Moses Hogan Singers. His arrangements, more than 70 of which have been published by the Hal Leonard publishing company, were performed by the Mormon Tabernacle Choir, soprano Barbara Hendricks and countertenor Derek Lee Ragin.

. 2003 ~ William L. “Weemo” Wubbena Jr., 72, a retired Army colonel who sang in Washington area barbershop quartets, died of cancer. Col. Wubbena was born in Marquette, Mich., and raised in Washington. He was a member of the Montgomery County chapter of the Society for the Preservation and Encouragement of Barber Shop Quartet Singing in America.

. 2018 ~ Vic Damone [Vito Farinola], American singer (On the Street Where You Live), entertainer, actor and TV presenter (Vic Damone Show), died at the age of 89

Messiah (HWV 56) is an English-language oratorio composed in 1741 by George Frideric Handel, with a scriptural text compiled by Charles Jennens from the King James Bible, and from the Psalms. It was first performed in Dublin on 13 April 1742, and received its London premiere nearly a year later. After an initially modest public reception, the oratorio gained in popularity, eventually becoming one of the best-known and most frequently performed choral works in Western music.

Part II of the Messiah covers the Passion, death, resurrection, ascension, and the later spreading of the Gospel, concluded by the “Hallelujah Chorus”.

And also on Nov.13 2010 unsuspecting shoppers got a big surprise while enjoying their lunch. Over 100 participants in this awesome Christmas Flash Mob.

Cappeau, a wine merchant and poet, had been asked by a parish priest to write a Christmas poem. Unitarian minister John Sullivan Dwight, editor of Dwight’s Journal of Music, created a singing edition based on Cappeau’s French text in 1855.

In both the French original and in the two familiar English versions of the carol, the text reflects on the birth of Jesus and of mankind’s redemption. Gesù Bambino by Pietro Yon has always had a place in my childhood memories since my church choir sang it every Christmas.  Other than that, it didn’t seem to be too well known but this song has been turning up in piano books lately.  There are now several versions in the O’Connor Music Studio if you are interested in learning this beautiful older Christmas carol.

Gesù bambino was written in 1917. The melody was used by Frederick H. Martens in his English language carol “When Blossoms Flowered ‘mid the Snows”. The melody and lyrics of the chorus are derived from “Adeste Fideles” (O Come All Ye Faithful).

Sung by David Archuleta and the Mormon Tabernacle Choir

“Good King Wenceslas” is a popular Christmas carol that tells a story of Good King Wenceslas braving harsh winter weather to give alms to a poor peasant on the Feast of Stephen (the second day of Christmas, December 26). During the journey, his page is about to give up the struggle against the cold weather, but is enabled to continue by following the king’s footprints, step for step, through the deep snow. The legend is based on the life of the historical Saint Wenceslaus I, Duke of Bohemia or Svatý Václav in Czech (907–935).

In 1853, English hymn writer John Mason Neale wrote the “Wenceslas” lyrics, in collaboration with his music editor Thomas Helmore, and the carol first appeared in Carols for Christmas-Tide, 1853. Neales’ lyrics were set to a tune based on a 13th century spring carol “Tempus adest floridum” (“The time is near for flowering”) first published in the 1582 Finnish song collection Piae Cantiones.

“Hither, page, and stand by me
If thou know’st it, telling
Yonder peasant, who is he?
Where and what his dwelling?”
“Sire, he lives a good league hence
Underneath the mountain
Right against the forest fence
By Saint Agnes’ fountain.”

“Bring me flesh and bring me wine
Bring me pine logs hither
Thou and I will see him dine
When we bear him thither.”
Page and monarch forth they went
Forth they went together
Through the rude wind’s wild lament
And the bitter weather

“Sire, the night is darker now
And the wind blows stronger
Fails my heart, I know not how,
I can go no longer.”
“Mark my foteps, my good page
Tread thou in them boldly
Thou shalt find the winter’s rage
Freeze thy blood less coldly.”

In his master’s steps he trod
Where the snow lay dinted
Heat was in the very sod
Which the Saint had printed
Therefore, Christian men, be sure
Wealth or rank possessing
Ye who now will bless the poor
Shall yourselves find blessing

“O Little Town of Bethlehem” is a popular Christmas carol. The text was written by Phillips Brooks (1835–1893), an Episcopal priest, Rector of the Church of the Holy Trinity, Philadelphia. He was inspired by visiting the Palestinian city of Bethlehem in 1865.

Three years later, he wrote the poem for his church and his organist, Lewis Redner, added the music. Redner’s tune, simply titled “St. Louis”, is the tune used most often for this carol in the United States.

Still, Still, Still is an Austrian Christmas carol and lullaby. In German its first line is “Still, still, still, weil’s Kindlein schlafen will!” (Hush, hush, hush, for the little child wants to sleep!)

The melody is a folk tune (authorship unknown) from the State of Salzburg. The tune appeared for the first time in 1865 in a folksong collection of Maria Vinzenz Süß (1802-1868), founder of the Salzburg Museum; it has changed slightly over the years but remains attributed to G. Götsch.

The words, which run to six verses in German, describe the peace of the infant Jesus and his mother as they sleep. There are various English translations.  This is one version:

Charles Wesley (1707-1788),  the younger brother of John Wesley wrote the words to this Christmas Carol.

Charles was a hymn writer and a poet, also known as one of the people who began the Methodist movement in the Church of England. Hark the Herald Angels Sing appeared in 1739 in a book called Hymns and Sacred Poems.

Wesley envisioned this being sung to the same tune as his hymn, Christ the Lord Is Risen Today,  and in some hymnals it is included along with the more popular version.

This hymn was regarded as one of the Great Four Anglican Hymns and published as number 403 in “The Church Hymn Book” (New York and Chicago, USA, 1872).

To celebrate the invention of the printing press, Felix Mendelssohn composed a cantata in 1840 called Festgesang or “Festival Song”. The melody of Mendelssohn’s cantata was then used by William H. Cummings and adapted it to the lyrics of Wesley’s “Hark the Herald Angels Sing”.

And, of course, no one can do it better than The Mormon Tabernacle Choir. 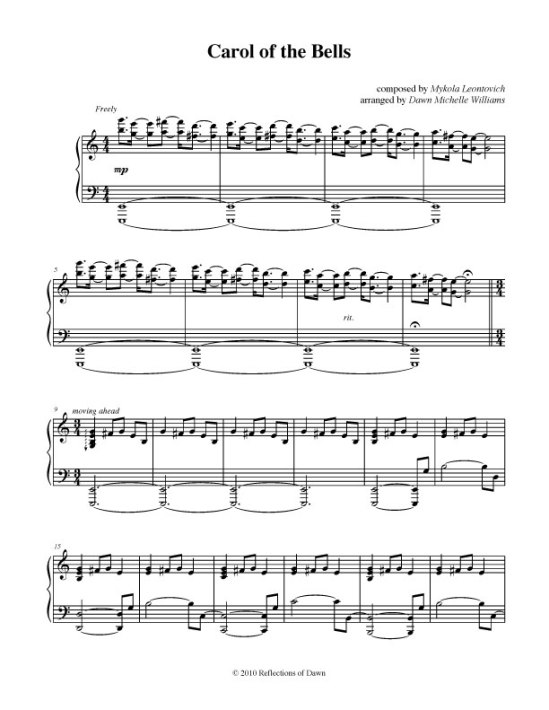 Carol of the Bells was composed by Mykola Dmytrovych Leontovych (1877-1921) in 1916. Originally titled Shchedryk, this Ukrainian folk song is sometimes called Ukrainian Bell Carol. “Shchedryk” which was associated with the coming New Year, originally celebrated in April.

Leontovych used this tune in 1904 along with lyrics by Peter J. Wilhousky to create the version that everyone knows today. It gained popularity during the 1920s and 1930s, and was introduced to an even wider audience when it was used in the movie “Home Alone”.

This video is from the Christmas special of the Mormon Tabernacle Choir, presented at the BYU channel. The orchestra and choir produce a very beautiful sound.

Not the standard version –

The O’Connor Music Studio has several versions of this Christmas Carol available for loan, including this version from the Mannheim Steamroller: